Lindsey Graham’s moment, it seemed, came on the evening of Jan. 6. With crews still cleaning up the blood and broken glass left by the mob that just hours before had stormed the Capitol, he took the Senate floor to declare, “Count me out” and “Enough is enough.”

Half a year later, a relaxed Mr. Graham, sitting in his Senate office behind a desk strewn with balled napkins and empty Coke Zero bottles, says he did not mean what almost everybody else thought he meant.

“That was taken as, ‘I’m out, count me out,’ that somehow, you know, that I’m done with the president,” he said. “No! What I was trying to say to my colleagues and to the country was, ‘This process has come to a conclusion.’ The president had access to the courts. He was able to make his case to state legislators through hearings. He was disappointed he fell short. It didn’t work out. It was over for me.”

What was not over for the senator from South Carolina was his unlikely — to many people, confounding — relationship with that president, Donald J. Trump.

For four years, Mr. Graham, a man who had once called Mr. Trump “a race-baiting, xenophobic bigot,” exemplified the accommodations that so many Republicans made to the precedent-breaking president, only more vividly, volubly and candidly.

But Mr. Graham’s reaffirmed devotion has come to represent something more remarkable: his party’s headlong march into the far reaches of Trumpism. That the senator is making regular Palm Beach pilgrimages as supplicant to an exiled former president who inspired the Capitol attack and continues to undermine democratic norms underscores how fully his party has departed from the traditional conservative ideologies of politicians like Mitt Romney, Liz Cheney and Mr. Graham’s close friend John McCain.

To critics of Mr. Graham, and of Mr. Trump, that enabling comes at enormous cost. It can be seen, for example, in Republicans’ efforts to torpedo the investigations of the Capitol riot and in the way the party, with much of its base in thrall to Mr. Trump’s stolen-election lie, is enacting a wave of vote-suppressing legislation in battleground states.

Mr. Graham, of course, describes his role in far less apocalyptic terms. Even as he proclaims — from under the hard gaze of a half-dozen photos of Mr. McCain — that the Republican Party is now “the Trump party,” even as he goes on Fox to declare that the party can’t “move forward” without the man who twice lost the popular vote, Mr. Graham casts himself as a singular force for moderation and sanity. 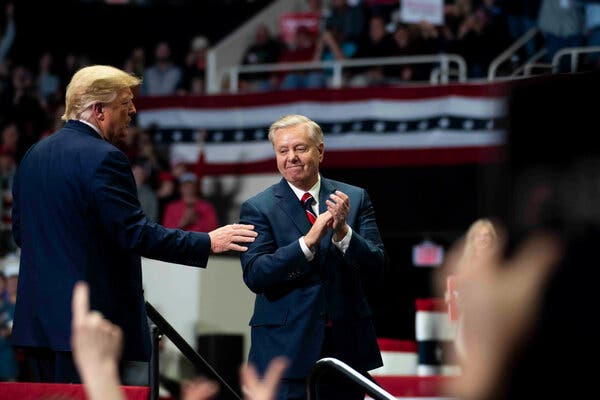 He alone can fix the former president, he believes, and make him a unifying figure for Republicans to take back both houses of Congress next year and beyond. To that end, he says, he is determined to steer Mr. Trump away from a dangerous obsession with 2020.

“To be part of a football team, you don’t have to be the quarterback, right?” Mr. Graham said in the interview. “I mean, there’s a value in being part of something.”

It was in that role, amid unrelenting pressure from Mr. Trump and his sons, that Mr. Graham called Georgia’s top elections official in November to inquire about the vote tally in the state, which Mr. Trump lost by nearly 12,000. That call is now part of a criminal investigation of the Trump camp’s actions in Georgia.

Yet nothing Mr. Graham does or says seems enough to satisfy the Trumps. That has left the self-described conciliator struggling to generate good will on both sides of the political divide.

In mid-November, as he was publicly urging Mr. Trump to keep up the election fight, Mr. Graham made a previously unreported phone call to President-elect Joseph R. Biden Jr., to revive a friendship damaged by his call for a special prosecutor to investigate the overseas business dealings of Mr. Biden’s son Hunter.

It was short, and not especially sweet, according to three people with direct knowledge of the exchange. Mr. Graham told Mr. Biden that, in attacking Hunter, he had done only the bare minimum to satisfy Trump supporters back home. (A Graham spokesman disputed that account.)

Mr. Biden, who viewed Mr. Graham’s statement as an unforgivable attack on his family responded by saying he would work with any Republican, but dismissed the approach as Mr. Graham trying to have it both ways, two people close to the president said.

“Lindsey’s been a personal disappointment,” Mr. Biden said a few days later, “because I was a personal friend of his.”

In the days following the election, he scrambled to stay on Mr. Trump’s good side, publicly urging him not to concede until he had exhausted all his legal challenges and listening calmly on late-night phone calls as the president raged about a stolen election. He even wrote a $500,000 check to aid Mr. Trump’s legal defense.

But privately he was already reaching out to Mr. Biden and counseling Mr. Trump to ramp down his rhetoric. And he steadfastly refused to appear at news conferences with Mr. Trump’s legal team or repeat their false claims — which annoyed the president and infuriated his son Donald Jr., always a Graham skeptic, retweeting stories with a “#whereslindsey” hashtag when he felt the senator was not standing up for his father.

The biggest source of residual anger inside the Trump bubble was Mr. Graham’s refusal, as chairman of the Judiciary Committee, to acquiesce to White House demands for hearings into Hunter Biden’s business dealings.

Mr. Graham said all the right things on Fox, and hinted he would get to the bottom of the matter. But his staff advised him that it was impossible to tell reality from disinformation, so he delayed and deliberated, happily deferring to the homeland security committee.

He had a better relationship with the president’s middle son, Eric, yet he, too, was growing frustrated that the senator would not even retweet claims of election fraud. At a family meeting, he fumed that Mr. Graham had always been “weak” and would pay a price because his father would be the most powerful Republican for years to come, according to a political aide who was within earshot. Mr. Trump was working the senator, too, according to people familiar with the exchanges.

Mr. Graham said that what happened next had nothing to do with the pressure bearing down on him. But on Nov. 13, he called Brad Raffensperger, the Georgia secretary of state, the first of a series of interventions Mr. Trump and his allies were to make into the tallying of the results in Georgia.

Mr. Raffensperger has said that Mr. Graham asked if there was a legal way, using the state courts, to toss out all mail-in votes from counties with high rates of questionable signatures. And a Raffensperger aide who was on the call said in an interview that Mr. Graham’s goal was getting as many ballots thrown out as possible.

Even so, he made no overt request to discard ballots, according to another Raffensperger aide, Gabriel Sterling. As such, prosecutors investigating the Trump camp’s actions in Georgia would probably have difficulty establishing any wrongdoing by Mr. Graham.

In the interview, Mr. Graham laughed off the idea that he had done anything wrong, saying he had called “Ratzenberger” simply to ask about auditing signatures.

Around the same time, he made another call, to Governor Ducey in Arizona. His aim, Mr. Graham said, was not to overturn Mr. Biden’s narrow victory but to counter the “garbage” Mr. Trump was getting from his own legal team, according to an aide who was given a readout.

In Mr. Graham’s mind, he had threaded the needle: He had professed loyalty and value to Mr. Trump while taking an unequivocal public stand, as Mr. Biden’s inauguration approached, opposing efforts to block certification of the election.

Then came Jan. 6, and his presumed declaration of independence.

Mr. Graham, in fact, began softening his tone almost immediately, following a tongue-lashing from the president and a confrontation, two days after the Capitol assault, with dozens of Trump supporters at Ronald Reagan Washington National Airport, chanting: “Traitor! Traitor!”By Jan. 13, when Mr. Trump was impeached on charges of inciting the riot, Mr. Graham was back on board, offering advice on how to quell a possible revolt by Republican senators. What followed, in the eyes of many Senate colleagues, was a frenzied overcorrection.

Mr. Graham has become an ever-more-frequent face on Fox, denying the existence of systemic racism and decrying federal aid to Black farmers as “reparations.” He posted a video of himself firing an AR-15 bought as protection from marauding “gangs” and forcefully backed Ms. Cheney’s expulsion from House leadership. He has embraced the culture-war grandstanding that he and Mr. McCain mocked when they were a team — recently saying he would “go to war” against students at the University of Notre Dame for trying to block a Chick-fil-A on campus over the anti-L.G.B.T.-rights politics of its executives.

Yet there are signs Mr. Graham may be playing an inside-outside game. He has placed himself at the center of a monthslong effort to draft bipartisan police-reform legislation and recently met with the Rev. Al Sharpton to hear him out on the bill. He voted for Mr. Biden’s infrastructure bill (and got censured for doing so by the Republican Party in Aiken County, S.C.). And when he tested positive for Covid-19 after being inoculated, he made a point of telling vaccine deniers in his own party to get their shots.

During his near-weekly golfing trips to Mar-a-Lago, he said, he is still trying to persuade Mr. Trump to “take it down a notch.” He remains convinced he can get him to play by the rules, and not the other way around.

Many of the people who have known him longest are not so sure.

From his office in Walhalla, just up the road from Central, Mr. Graham’s old law partner, Mr. Brandt, has been thinking about something the senator told him during a visit eight or nine years ago.

“Larry, you are too honest to survive in Washington,” Mr. Graham said. “Eighty-five percent of the people there would sell their mothers to keep their jobs.”

Mr. Brandt ran into Mr. Graham at a local restaurant in 2017, as the senator was beginning to court Mr. Trump. Mr. Brandt took him to task, reminding him of their “85 percent” conversation. “I said, ‘Lindsey, don’t sell your mother,’” he recalled.